CAS stencilling for a pink Christmas 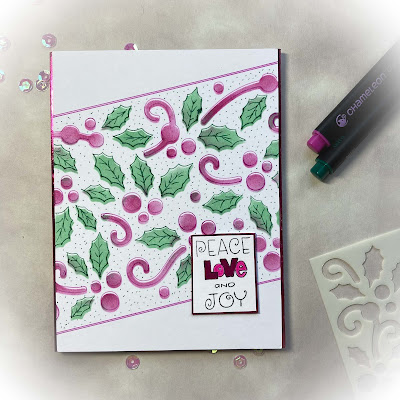 After waiting for many weeks or rather, several months, my crafty orders are slowly but steadily being released by Greek customs. The delay is caused by the new EU tax rules that came into effect on July, 1st. To give you an idea, I finally received a parcel from the UK yesterday, that had been shipped on June, 27th.

Anyway, the stencil that I used on today's card (Winter Holly by Creative Expressions/Sue Wilson) arrived a few weeks ago. Since it's a slimline stencil, it did not cover my entire A2 card panel, so I decided to place it at an angle. After I finished my ink blending, I shifted the stencil slightly and drew the outlines using Chameleon fineliners. I also used these markers to add veins to the holly leaves and draw lines at the top and bottom. Because the panel still looked a bit bare, I added spots all over.

To finish off, I foiled the edges of my card base using double-sided tape and foil sheets from a bargain store. I also created a small foiled panel for matting my sentiment (from an older SSS stamp set). I used my Copic markers to colour in the Love letters. 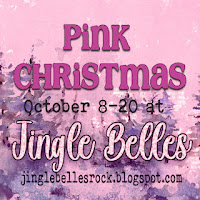 As always, the first JB challenge in October
is all about pink holiday cards.
And for every card that is being linked up
this fortnight, the lovely Jingle Belles,
Lauren and Stephanie, will each be donating
2 dollars to the US Breast Cancer Research Foundation

HLS - Anything goes with stencils 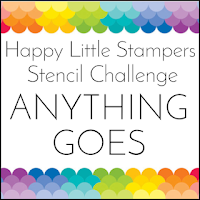 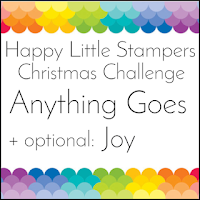 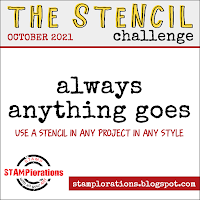 NBUS - #31 Anything goes with never before used stuff