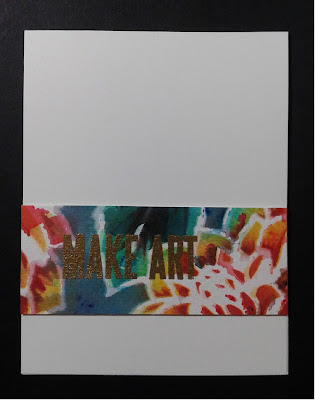 This card started as an experiment. I wanted to see if I could create a layered look using brushos through 2 layering stencils (Altenew Dahlia) that I had not used as yet. It did not come out the way I had hoped. I think I might have had a better chance of success if I had stuck to one colour, which I did not. Anyway, I did not want to let my panel go to waste, so I decided to do some distress ink blending over my brusho panel using the 2 stencils again. I die cut a panel from my large piece, but have not turned it into a card yet. Instead, I used the strip that was left to create this super CAS card. All I did was heat emboss a sentiment (by Wendi Vecchi, from a Ranger bumper pack that came with a  crafting magazine from the UK earlier this month) using gold embossing powder and adhere it to my card base using liquid glue. 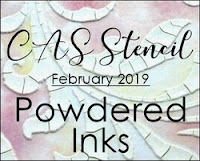 The Flower Challenge - #29 Use your latest stamps or dies 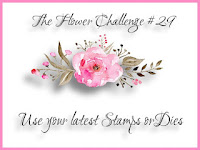