I created this Christmas card today, after being inpired by a card I saw at a new website called Card Annex. I had recently bought some paper tape, but this turned out to be a bit small to serve as a background for a card. So I had a look at my paper scraps instead and found a collection of Marianne Design strips and worked from there. What you see in front of the card are the mini scraps that were left after finishing the card. 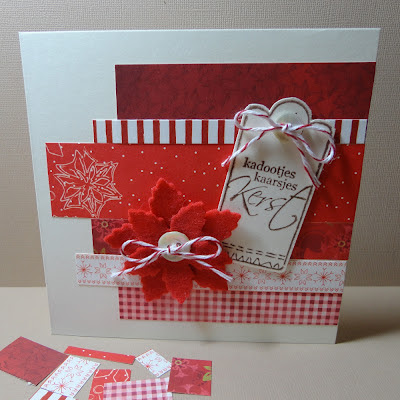 I adhered the paper strips to a square 13.5 x 13.5 cm cream card blanc from my stash, concealing part of the top and bottom strips behind the next strip because they were a bit too wide. I figured that layering them was safer than trying to cut them LOL. After stamping the label (MD) with Memento Rich Cocoa on another piece of the same cardstock, I stamped the Christmas sentiment (from the same MD set). The poinsetta (also MD) was die cut from red felt. The pearlescent buttons are some old pillow buttons from my friend's big button box (I sorted out the buttons when I was visiting and brought a large selection home with me!). The twine came from some blog candy I won. I have just remembered that I had actually intended to add some pearls to the left corner of the top strip but I forgot, because I was in a hurry to link the card up to some WCMD challenges and events. I may still add them later LOL.