Sometimes, you think you have an idea for a card, but it just does not come out right. And sometimes the end result surpasses what you had in your head. That's exactly what happened with this card.
The general idea for the wreath with the ribbon roses came from a book by Erica Fortgens, 101 Ideas for Embroidery on Paper, but instead of the embroidered leaves in between the roses, I used a Marianne Design holly stamp. I also cut out a circle to creat a see-through to the sentiment inside, which comes from a collection of free clipart called Arthur's Clipart Collection. After printing it, I cut it out using a nestability. The red ribbon is from my stash. 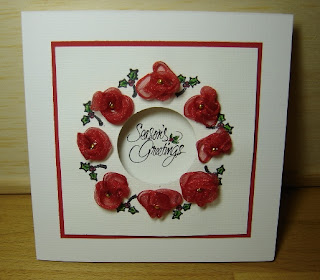 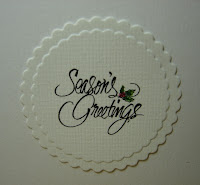 I would like to enter this card into the following challenges:
Jingle Belles – Oh HOLE-y Night!
Bah! Humbug! – Beads
CCAYR – Mainly white + bling
Winter Wonderland – Holly and/or ivy
Less is More – Button(s) or Ribbon(s)
ABC Christmas Challenge – O is for Older image
Posted by Marianne at 00:50