This month's Christmas muse, Cornelia, did not create 1 but 4 cards to inspire us. The idea is to create one card for each of the inspiration pieces. I am hoping to share 4 cards in the next couple of days.

Here is my first one, or actually two, since I created two versions of my card. 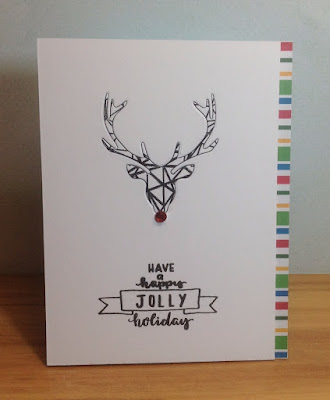 For the card above, I focused on the graphic fragmented stag, the stripes and the primary colours of Cornelia's second card at the top right. 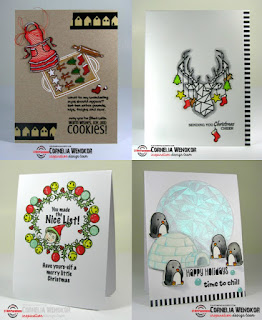 I made the front of my side-folding card a little narrower than the back and adhered a strip of striped paper to the right edge of the back panel. I had originally intended to stamp the lined pattern behind the aperture that I had die cut in a separate panel using the Prize Stag die (Essentials by Ellen), but it did not turn out quite right, so I stamped the pattern (using the star stamp from Winnie & Walter's True stamp set) again on the actual die cut and inlaid it into the aperture. To finish off, I stamped a sentiment from the Season's tweetings stamp set (Winnie & Walter) and adhered a red gem for a little extra whimsy.

I created a second card using the same idea, but for this one, I adhered two strips of striped paper along the edges of my top-folding card and then added my top panel in the middle. Instead of the black and white stag, I inlaid the stag from metallic red paper that I was left over from a previous project and was stored with my die. As always, the shine is hard to capture in a photograph. 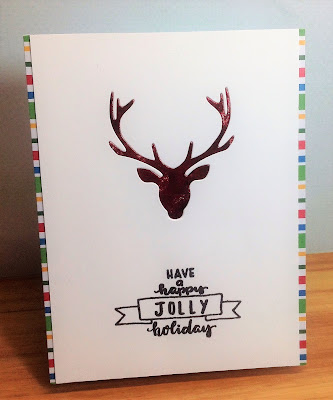 I'm entering my cards into the following challenges: